Atrial fibrillation (AF) is the most common sustained cardiac arrhythmia seen in clinical practice. It is a perennial hot topic for General Practitioners and remains a very common source of MRCGP exam questions. The diagnosis and management of AF presents some serious challenges, and there have been several significant new developments over recent years. It remains an important contributor to population morbidity and mortality, being particularly common in the elderly, and growing in prevalence with the ageing of the population.

AF can be defined as an abnormal heart rhythm that is characterised by the rapid and irregular beating of the atria. This results in an irregular and often abnormally fast heart rate. Physiologically there is a loss of active ventricular filling, which is associated with:

There are currently two sets of guidelines that are commonly quoted and used in UK practice, the 2021 NICE guidelines, and the 2016 European Society of Cardiology (ESC) guidelines. We recommend that, at present, MRCGP candidates are familiar with both sets of guidelines and key learning points from both are discussed in the notes below.

In order to fully understand the management of AF, it is important to have a good understanding of the terminology used to describe the different subtypes that can occur.

A wide range of medical conditions can cause AF, and these are commonly grouped into cardiac and non-cardiac causes:

Lone AF is defined as AF without overt structural heart disease and characterised by a normal clinical history and examination, ECG, chest X-ray and, more recently, the echocardiogram.

Baseline blood tests should be arranged for all patients, to assist in the recognition of an underlying condition and risk stratification. These should include:

It is recommended that an ECG is performed in all patients with suspected AF, regardless of whether or not they are symptomatic. This would generally be following the detection of an irregular pulse.

The classic ECG features of AF are: 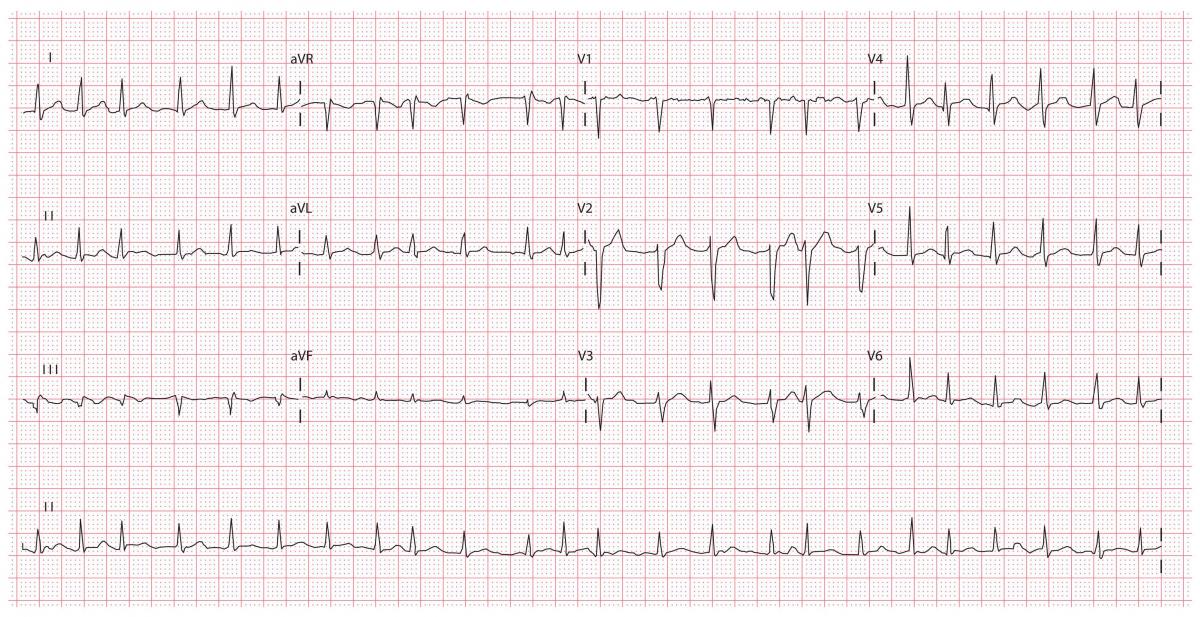 ECG example of AF with a rapid ventricular rate

It is important to remember that an ECG is only diagnostic in non-paroxysmal attacks. If paroxysmal AF is suspected and has not been detected by a standard ECG recording, a 24-hour ambulatory ECG monitor should also be organised. If reported episodes are more than 24 hours apart, then an event recorder ECG is indicated.

The guidance on whether or not transthoracic echocardiography (TTE) is indicated differs between the NICE 2021 and the ESC 2016 guidelines:

The management of AF involves the control of the arrhythmia (by either rhythm or rate control) and thromboprophylaxis for stroke prevention.

Any underlying cause should also be treated, e.g. pneumonia or thyrotoxicosis, and any co-existing heart failure should be treated appropriately.

Urgent referral for admission to hospital is indicated when:

Routine referral to a cardiologist should be considered when:

There is currently no evidence that rhythm control is superior to rate control in preventing stroke or overall mortality in patients with AF. Therefore, rate control is the first-line strategy in the majority of patients.

Referral for a rhythm control strategy is indicated in patients with:

Rate control should be achieved as follows:

The CHADS-VASc (or CHA2DS2-VASc) scoring system is an updated scoring version of the CHADS2 core used to assess stroke risk for patients with atrial fibrillation.

The CHA2DS2-VASc score is calculated as follows:

If the score is 2 or greater the patient is high risk, and the patient should be anticoagulated with a direct-acting oral anticoagulant (DOAC) if there are no contraindications.

The 2021 NICE guidelines recommend using the ORBIT bleeding risk score to identify patients at high risk of bleeding. A review of the evidence has revealed that the ORBIT score is more accurate as a risk predictor than the previously used HAS-BLED score. The ORBIT score estimates the risk of major bleeding for patients in AF being considered for anticoagulation. It is often used in combination with the CHA2DS2-VASc score when making a decision on anticoagulation for these patients.

The components of the ORBIT score are as follows:

Specialist advice should be sought for patients with non-modifiable risk factors for bleeding, e.g. active cancer, prior major bleed history etc. Both sets of guidance agree that falls are not a reason to withhold anticoagulation unless they are severe and uncontrolled.

Which anticoagulant should be used?

Both the 2021 NICE and the the 2016 ESC guidelines recommend the use of a direct-acting oral anticoagulant DOAC). A November 2017 Systematic review with network meta-analysis showed that DOACs as a class are more effective, safer and reduced all-cause mortality compared to warfarin. There is no current antidote for DOACs, but research has shown that they are still safer than warfarin, even without the potential for reversibility.

Apixaban 5 mg bd was ranked as the most effective DOAC for reducing stroke and all-cause mortality and was also the safest with the lowest incidence of bleeding. The bleeding risk is still significant though, at 1-2% annum.

DOACs are also cost-effective, and despite high drug costs, they are cost-effective overall due to the reduced risk of stroke and hospitalisation.

If direct‑acting oral anticoagulants are contraindicated, not tolerated or not suitable in people with atrial fibrillation, offer a vitamin K antagonist (e.g. warfarin). For adults with atrial fibrillation who are already taking a vitamin K antagonist and are stable, continue with their current medication and discuss the option of switching treatment at their next routine appointment, taking into account the person's time in therapeutic range.

What about patients that are already taking aspirin?

Around 15% of patients with atrial fibrillation also have co-existing coronary artery disease for which they are already prescribed aspirin or other antiplatelet medications. The combination of antiplatelet medications with anticoagulants significantly increases bleeding risk but also reduces the risk of vascular events. Aspirin monotherapy solely for stroke prevention in patients with AF should not be offered.

The 2016 ESC guidelines recommend that for patients that require anticoagulation for AF, co-prescription of antiplatelet medications should be avoided unless there is a clear indication for platelet inhibition. Their guidance is summarised below:

What is the prognosis for patients with AF?

Despite recent advances in the management of AF, there is still a reduced life expectancy for older patients. People with AF have double the mortality and a five-fold higher risk of stroke than those without fibrillation. Ultimately, the overall prognosis depends greatly on the patient’s underlying medical condition.